— Image from the winning entry “Interior for the Most Vulnerable” by Team SIAN Architects, New Delhi

The open ideas national competition, organized by INHAF (Habitat Forum) and supported by GRUH Finance, sought to engage practicing architects, interior designers, planners, engineers and senior students of these faculties, related Non-Governmental Organizations (NGOs) and others with innovative ideas. The intent of the competition is to develop proposals for improving livability of small houses or apartments being constructed by public agencies and private builders under PMAY (Pradhan Mantri Awas Yojana) and other affordable housing schemes and projects.

The competition seeks to present the challenge of designing small houses built by public or private housing providers to the design professionals who, for various reasons, tend to not engage with such projects. It also aims to draw attention and raise awareness regarding:

The competition also seeks ideas on making the building bye laws more realistic and sensitive in order to facilitate the needs of small apartments and low cost buildings. The competition also urges participants to identify and present innovative ideas and solutions created and adopted by residents in their homes to improve livability. The underpinning intent of the competition is to emphasize practical, doable, implantable ideas.

The competition sought to engage with aspiring architects, designers and professionals to re-think and re-orient their approaches in order to address the challenges of small houses by offering better designed small houses and liveable spaces.

First Place: Interior for the Most Vulnerable by Team SIAN Architects, New Delhi

Exccerpt from the Jury’s Report: ‘Anand Prabhat’ in New Delhi is reimagined as a dwelling prototype challenging the existing and instead proposing an inclusive neighbourhood for those displaced in the name of development and in the process of world class elite city making… 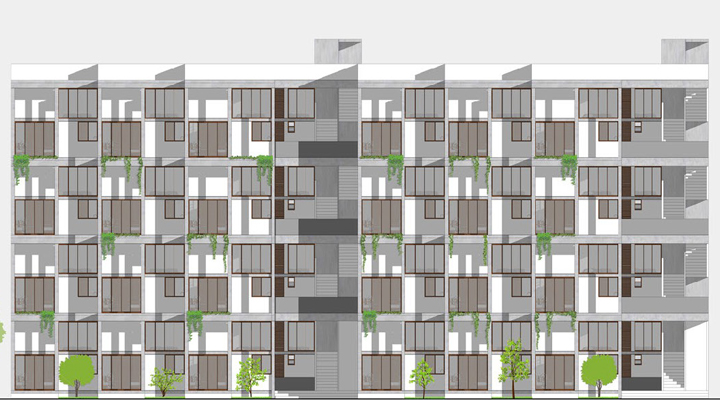 Exccerpt from the Jury’s Report: The proposal looked at spaces in terms of volume and not in terms of ﬂoor area, thereby creating an interesting grid pattern of modular units that can repeat-this differentiated the approach adopted by this group from the other competitors… 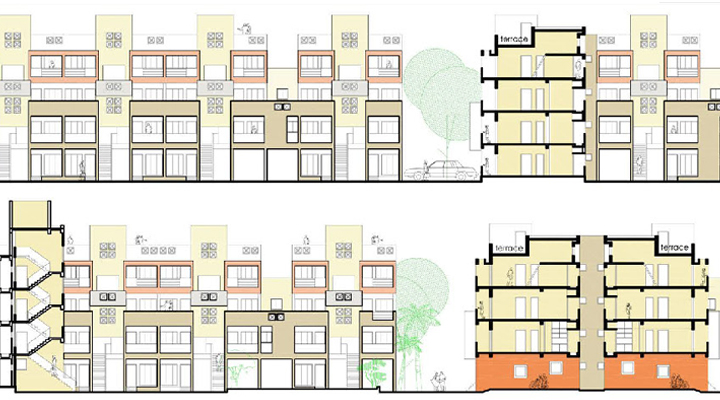 Exccerpt from the Jury’s Report: The technical ﬁnesse and detailing of this proposal is impressive as it proposes more units, lesser FSI consumed and cluster design ensures privacy and openness for all units. [It] draws inspirations from local customs and cultural identity…

Team WWP’s “Organic Growth” focuses on organic growth of a slum settlement in Mumbai and maps the various interactions of its residents with the built form and the community. The proposal keeps the resident’s behavioural needs and aspirations at the centre and encourages them to build their own future space, while the remaining space becomes a public space for interaction and community living. This organically developed space leaves more area for ﬂexible, organic growth in the housing conﬁguration. The process of mapping and extensive detailing of several permutations of ﬂoor plans and section makes this proposal worthy of an honourable mention.

Team RLDA Research looks at the Govindpuri In-situ Slum Redevelopment through a different lens of affordability, informality as well as formality. The proposal integrates different ideas of ownership models by looking at different regimes of property rights against multiple type of security that would enable market exchange, secure tenure and would protect against market induced displacement. The proposal adopts a unique stance of incorporating the ﬂexibility of informality and predictability of formal systems to generate equitable affordability across different strata living in in-situ slum redevelopment programs. The extensive analysis and comprehension of housing typologies and also being considerate about how livelihood spaces transform as community spaces situates Team RLDA’s work in a unique position and also deserving of a honorary mention in this competition.

This competition was unique in its approach in looking at small houses and the challenges the residents in these houses face, in terms of design and livabilty. It was surprising to see young architects and designers deeply investigating the life of the inhabitants and also being sensitive to their needs and aspirations. Several entries were able to understand the meaning of housing as a verb and a process engaging people as a factor that could inﬂuence design and deeply improve living in the constraints of small spaces. However, the competition’s main emphasis was on ideas focused on innovative space conﬁgurations and extensions and most entries were not able to explicitly articulate this aspect..

Affordable housing design demands a certain discipline and sophistication that is essential to deeply understand how compact spaces can be re-envisioned and rejuvenated. Such an approach was missing in the submissions and the jury would suggest that future designers and architects should ﬁrmly place faith in the agency of design in responding to these challenges. What however is commendable are the efforts made by participants to outline their ideas in detail to include costing as well as addressing the issues related to sustainable design.

Speaking about the competition components, the participants were wholly focused on the design aspects and not many focused on policy in the form of bye-laws or the case study component of the brief. While the competition brief was explicit about practicality & affordability through a re-examination of the building bye laws, most participants have not examined the speciﬁc implications of bye-laws rather have surmised the general and by-large improvements one wishes to see in the building bye-laws. The jury strongly advises participants to re-look and critical examine the building bye-laws as ﬁnally that becomes the codiﬁcation of the design aspirations for their implementation on the ground.

Another interesting observation emerging from reviewing the entries is regarding the case studies and its effectiveness as a learning and feedback loop. The case studies have focused on projects done on low-cost, affordable housing cases from around the globe, but the people centeredness of design that had to be extracted through such case studies is absent. The competition wanted participants to explore their city’s affordable housing and observe the uniqueness of people’s solutions for livability. Such observations would have enhanced the submissions greatly.

The jury commends all participants for their vigour and efforts in presenting the most challenging sites and re-designing them. It was an arduous task considering the fact that the competition demanded not just a design solution, but also to look at policies, framework and bye-laws that often cripple and leads to standardized formula-based design. The jury believes that the participants (regardless of the result) realized the role of the new architect/designer/planner/social scientist/practitioners in creating and being involved in the dialogues that surround the affordable housing debates in India. The role of a contributing to better designed houses, better communities, better cities begins here and with a small step towards looking inwards to that basic unit of the small houses.

The jury would like to thank all the participants for their tireless efforts, time, and patience in being part of this unique competition. The jury hopes for an increased and even more enhanced participation and rigor in the next edition of this competition.

Note: Ashok B Lall was earlier announced as one of the jury members in the competition. Mr. Lall could not be a part of the jury process due to personal commitments and withdrew from the jury panel.

Results can be viewed on:

The winning entries shall be published on the publications of the following media partners:

The winning teams shall be contacted individually regarding the prizes and other details. The honourable mentions shall receive a certiﬁcate of recognition.